Eric Firestone Gallery is pleased to present Joe Overstreet: Selected Works, 1975-1982. In these works, Overstreet (1933-2019) experimented with paint application and painting supports: using techniques like pouring, cutting and attaching strips and lengths of paint in a Fibonacci pattern, and using wood dowels to create shaped canvas supports that evoke nomadic structures and indigenous traditions.  On view will be work from his Vineyard series, his Sea Songs series, and his Fibonacci paintings.

This is the gallery’s second solo exhibition of work by Overstreet, and the first exhibition since the artist’s passing in June 2019.  The Vineyard and Fibonacci paintings demonstrate a progression from his “Flight Pattern” paintings of the 1970s (unstretched canvases tethered to the wall by ropes) into a continued exploration of how paint could be applied to surfaces. Most notably, in this late 1970s work, he began applying and mixing acrylic color on plastic sheets, peeling off forms, and adhering them to canvases with acrylic gel medium. It was an incredibly productive, free period of experimentation.  In addition to pouring, Overstreet would use a multitude of tools to drip paint and mix it, creating variegated effects on the surfaces.

He also experimented with different supports. He began to apply paint to stainless steel wire cloth surfaces: the type used on screen windows and doors. A trip to Barbados led to this work: the sea was so clear that he could see fish swimming and their shadows 20 feet down.  The work is also associated with memories of growing up in Mississippi, and looking out at fields, wanting to play, and being restrained behind screen doors. Overstreet described, “I started to reflect on these memories, always thinking of nature, understanding that nature is the first call.” Eventually these associations became political, as in considering the experience of being screened in or out.

Overstreet was born in rural Mississippi - an area mostly populated by African Americans and people of Choctaw heritage. Like many African American families who were part of the Great Migration, Overstreet’s early life was nomadic, and his early exposure was to Black and Native American rural culture.

In the 1950s, Overstreet studied at the California School of Fine Arts (San Francisco) and California College of Arts and Crafts (Oakland).  He began his career in the Bay Area, and was a fixture of the Beat scene, before moving to New York City. His Grant Avenue studio was located near that of Sargent Johnson, a sculptor and painter who became a mentor.  Johnson was an adherent of the philosophy of Alain Locke – the “father of the Harlem Renaissance,” who advocated that African-American artists look to their ancestral legacy for aesthetic sources and inspiration.

In the 1970s, Overstreet’s work was also central in watershed museum exhibitions of African American artists in the period, including “Afro-American Artists: New York and Boston,” (1973) organized jointly by the Boston Museum of Fine Arts and the National Center of Afro American Artists; and “New Black Artists,” (1970) organized by the Brooklyn Museum.

However, the Vineyard and Fibonacci paintings are not only related to artists of color who were his contemporaries, such as Al Loving, Ed Clark, Jack Whitten. They reflect an underground culture of painterly experimentation in the period that expressed itself with artists including Lynda Benglis pouring paint on the floor, Jules Olitski using a spray gun, and John McCracken leaning pristinely painted planks against the wall.

Overstreet was a relentless experimenter with painting – investigating both the spatial and textural possibilities of painting, and also complex cultural histories.  He believed that content could be embedded in abstraction. The Vineyard and Fibonacci paintings reflect the space and place of his travels, his childhood in Mississippi, the New York environment of artist lofts, and the streetscape of the Bowery in the East Village, cross-cultural traditions and vanguard painterly process.

Overstreet was committed to social and political causes, rather than art world trends. He is recognized as a significant arts community organizer. In 1973, he and his partner Corrine Jennings established Kenkeleba House on East 2nd Street, a studio building and gallery that has presented innumerable exhibitions of work by artists of color.

ver the last two years, Overstreet’s contribution has been recognized with renewed attention by museums and scholars. This exciting body of work — which feels relevant to much contemporary art — will be presented for the first time since it was made over forty years ago. 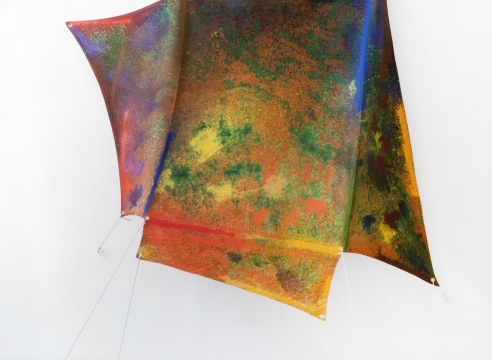 Joe Overstreet
Back To Top