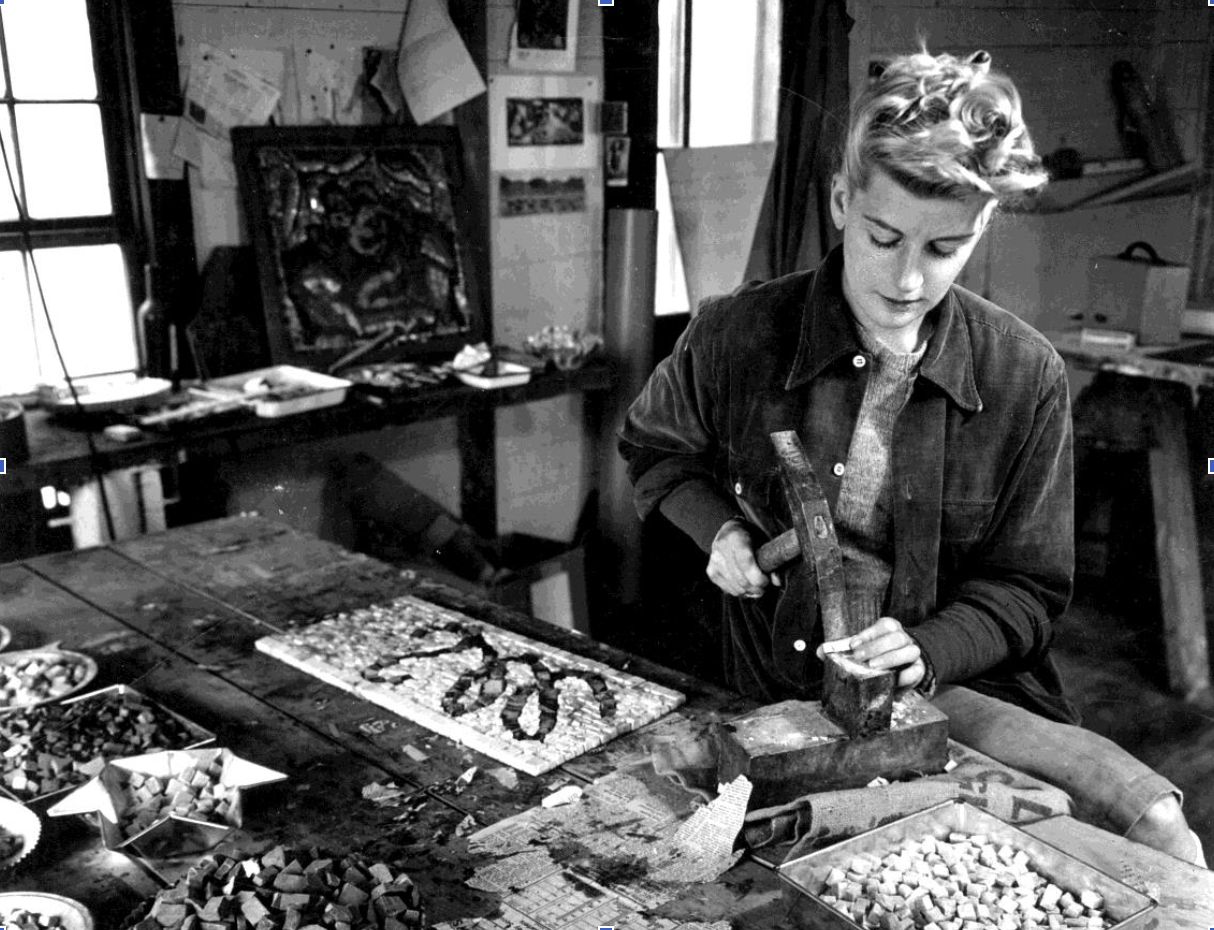 Jeanne Reynal (1903-1983) is a significant figure of the New York School, a mosaicist who showed with Betty Parsons Gallery. Reynal was dedicated to challenging expectations of the medium by creating, as she described, “a new art of mosaic, a contemporary and fresh look for this ancient medium.”  Her work was largely abstract.

Born in White Plains, NY, Reynal apprenticed from 1930-38 with Boris Anrep, a Russian mosaicist working in Paris. This established her interest in working with the medium. Reynal spent the World War II years living in San Francisco, and in Sierra Nevada.  Her first solo exhibition was held in Los Angeles in 1940.

Reynal’s father died in 1939, allowing her resources with which to build an art collection.  She acquired a 1941 Jackson Pollock painting from Peggy Guggenheim’s gallery -- one of the first ever sales of a Pollock. At this time, Reynal developed a relationship with the first director of the San Francisco Museum of Modern Art: introducing her to the work of Pollock and other first-generation New York School artists, and helping to set the course of acquisitions and exhibitions at the museum.  Reynal’s closest artist friend was Arshile Gorky, and his wife Agnes (known as Mougouch). Reynal would show her own work in the SFMoMA Annual exhibitions from 1940-46. During her West Coast years, Reynal also developed a friendship with Isamu Noguchi who had enrolled, voluntarily, in an internment camp to aid other Japanese-Americans.  She would later collaborate with Noguchi on mosaics for tables of his design. Reynal was also associated with the Surrealists - many of whom were living in exile in the U.S. In 1945, Reynal took a six week visit to the Hopi, Zuni, and Navajo Indians with André and Elissa Breton as interpreter and guide. 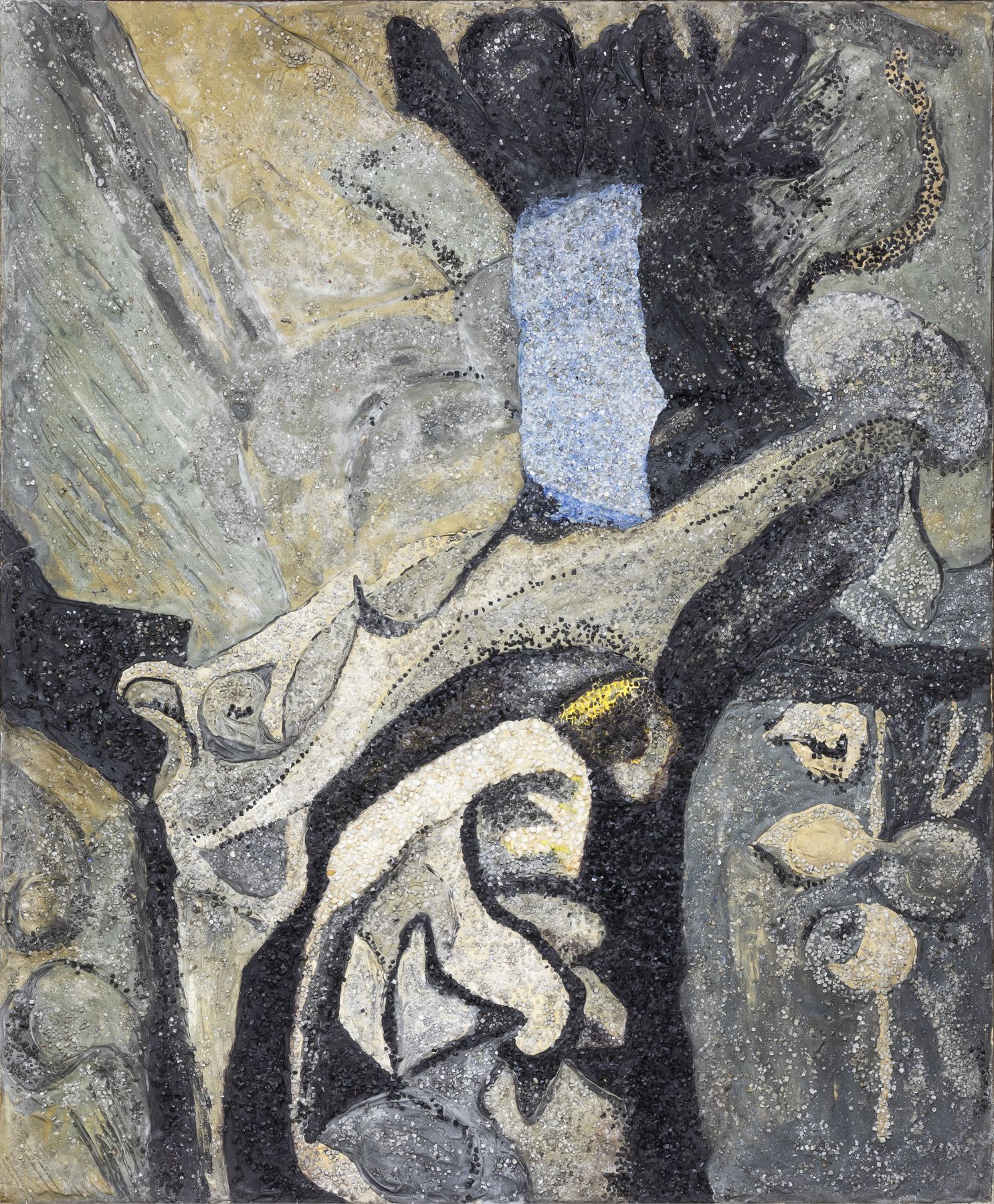 Reynal moved to New York City in 1946. At that time, she further developed friendships with artists including Willem and Elaine de Kooning.  In 1953, she married Thomas Sills, a largely self-taught African American painter. They traveled together across Russia, Turkey, Greece, and Italy in 1959 to further study the art of mosaic. In 1960, she was asked, by Elaine de Kooning, to take over the organization of a show of Abstract Expressionist women artists held in West Texas in 1960, at Dord Fitz Gallery.  It was in this period that Reynal began exhibiting with Betty Parsons.

Reynal was the subject of a traveling solo exhibition, organized by the San Francisco Museum of Modern Art, in 1964. The same year, a monograph of her work, with essays by Elaine de Kooning, Dore Ashton, and Lawrence Campbell, was published. The solo show traveled to the Sheldon Museum in Lincoln, Nebraska, a city where, the following year, Reynal would create mosaic murals for the State Capitol building.

Reynal traveled with her husband, Sills, throughout South and Central America: Mexico, Guatemala, Honduras, Peru. She was influenced by indigenous art throughout her travels. In the early 1970s, Reynal began making totem sculptures utilizing mosaic tesserae and pieces of shell. These monumental works were exhibited at Betty Parsons and at the Art Association in Newport, Rhode Island.  In the late 1970s, she made a series of portraits in mosaic (many of artist-friends), and depictions of animals.

Reynal’s work can be found in institutional collections throughout the country, including the Museum of Modern Art and the Whitney Museum of American Art, both New York; the Menil Collection, Houston; and the Los Angeles County Museum of Art. Eric Firestone Gallery represents the estate of Jeanne Reynal and will be presenting a survey exhibition of her work titled: Mosaic is Light: Work by Jeanne Reynal,1940-1970 from January 28th - April 10th, 2021.

smalti, marble, and pigmented cement on board 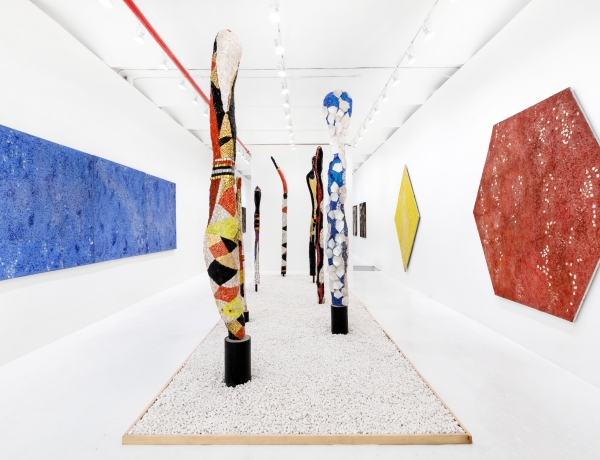 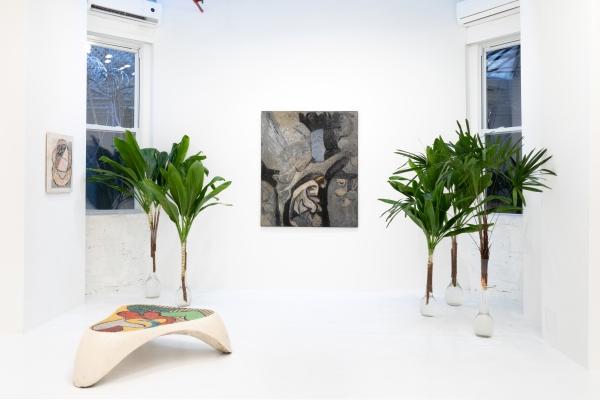 The New Yorker: Goings on About Town, Jeanne Reynal

During the acent of Abstract Expressionism, Reynal reinvented the art of msaics, embracing lyrical geometries and biomorphism in a glimmering, varied body of wall-mounted and freestanding works.  This bountiful survey, filling two floors at Eric Firestone Gallery, spans three decades of the New York School artist's career, from 1940-1970. (Reynal died in 1983, at the age of eighty.) Her novel approach involved a degree of spontaneity that is not usually assocated with the ancient medium; a short documentary on view, from 1968 captures Reynal speedily sketching into wet cement and scattering stone tiles. Her early compositions are flat and graphic, as examplified ina 1943 collaboration with Isamu Noguchi, for which she decorated the surface of a low triangular table. But moody, encrusted works fromt he fifties play up the craggy topographical  potential of mosaics, which Reynal studied with a Russian master, in Paris, in the ninteen-thirties. By 1970, her pieces had become quai-figrative, seen here in striking procession of undulating, patterned pillars rising from a bed of white gravel. 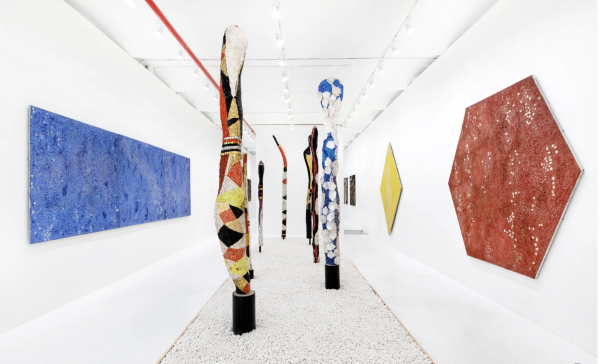 Raised in and around New York by French parents, Jeanne Reynal (1903-83) spent most of the 1930s apprenticed to a Russian mosaicist in Paris. She came back with strong opinions: Mosaic was neither painting nor sculpture, she wrote in a 1964 monograph, and Renaissance artists had “taken an ax” to the ancient art form by laying their tiles flush instead of letting them protrude to catch the light.

Policing genre boundaries no longer seems so important. But the strongest pieces in this show, titled “Mosaic Is Light: Work by Jeanne Reynal, 1940-1970,” derive much of their considerable impact from their disconcerting perch between painting and sculpture.

“Ogo,” a cement-on-board panel just over 4 feet by 5 feet, is a busy abstract whorl of reds, grays and blacks. As a painting, it would be overwrought. But the variety of its textures — the pits, the streaks, the unexpected glitters as you shift from foot to foot — draw your attention away from the composition and, in a way, counterbalance it. Three 1959 monochromes — a flat red hexagon, an enormous yellow diamond, and a triptych of blue squares, all of them strewn with broken glass and mother-of-pearl — go further, wringing so much action out of a broken surface that the very notion of a flat one comes to seem absurd.

Seven elegant monoliths that Reynal made in the early ’70s after a trip to Africa do something like the opposite. Covered with red, black and gold tiles so shiny they’re almost reflective, and studded, in one case, with palm-size pieces of mother-of-pearl, their surfaces dazzle, letting their sinuous shapes slip right behind your eyes.