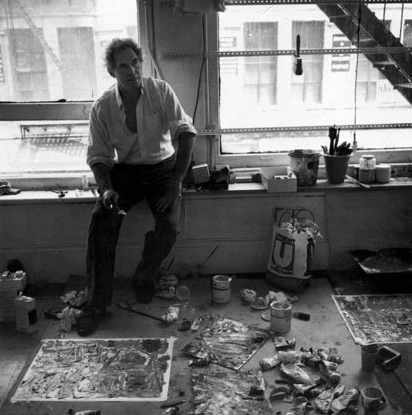 Jay Milder (b. 1934, Omaha, Nebraska), first exhibited his “Subway Runners” series at Martha Jackson Gallery, NY, in 1964. These paintings, based on the subject of people running to catch trains, are explosive in their energy and materiality: dense, three-dimensional surfaces of oil paint mixed with volcanic ash. The faces and heads are huge, dominating most of the canvas, with arms and legs in motion, and the setting of subway stations and tracks depicted with loose, gestural marks.

The work is connected to European sources like Dubuffet and COBRA artists; Milder lived in Paris and studied with André Lhote and Ossip Zadkine in the mid-1950s.  There, he also became aware of the work of Chaim Soutine, who would be an important influence in terms of a gestural, painterly approach to Cubism enlivened by spiritual belief. Milder’s early travels to Morroco and Mexico also informed his early development.

In the summer of 1958, Milder lived in Provincetown, where he came into contact with Red Grooms and Bob Thompson, and showed at the Sun Gallery alongside Mimi Gross, Alex Katz, and Lester Johnson. Milder became associated with a “second-generation New York School” Figurative Expressionism. Back in New York, he co-founded, with Red Grooms, the artist-run City Gallery in their shared loft in the Flatiron District, giving Claes Oldenberg and Jim Dine their first New York exhibitions.

Milder experimented early on with spray paint, and created “walls” of paint with his impasto surfaces; in this and his subject matter, he has been connected to graffiti and subway art. His work and personal symbology also references his lifelong study of Kabbalah and the belief that art can function as a vehicle for social commentary, humanity, and healing.

oil and volcanic ash on canvas