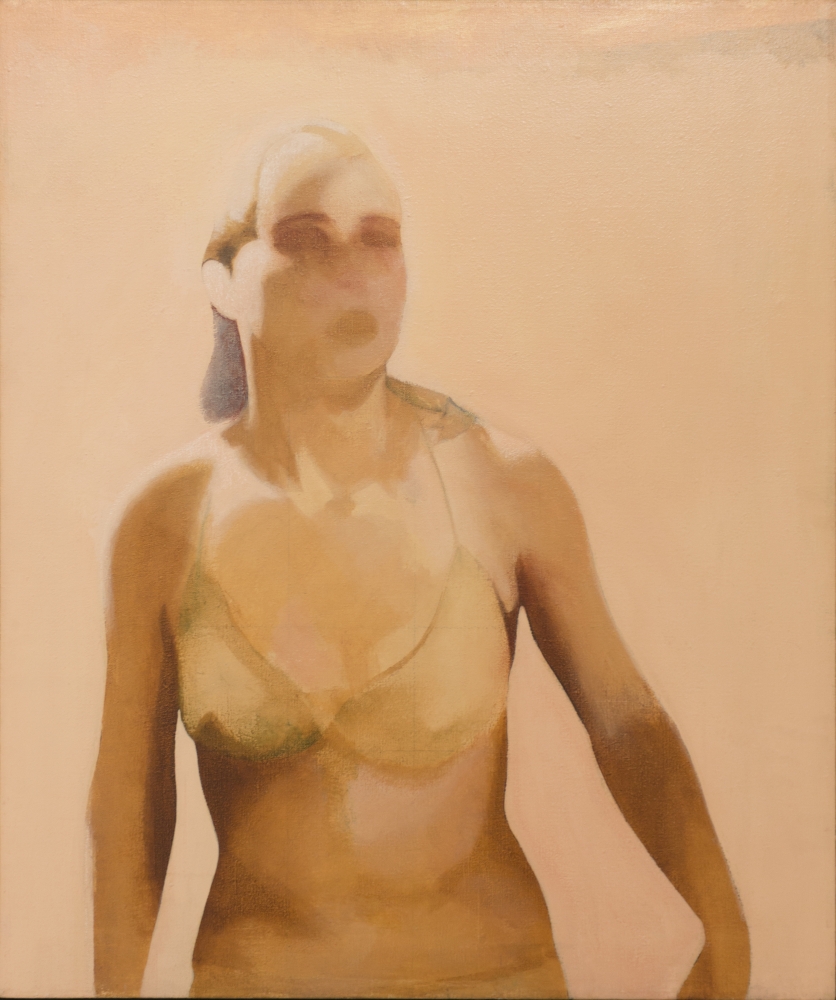 Howard Kanovitz, like dozens of other paint-intoxicated younger artists, was just beginning to show the results of a long apprenticeship to the master of Action Painting. His generation was a casualty of sudden, messy rectiication of public taste to include Pop and “Systemic” art – and of its hysterical aftermath. Not all of the young Expressionists kept their personal balance through this cruel second obscurity; not all of them survived bitterness and self-doubt to start over and to rise again. Which helps explain the peculiar triumphantness of Kanovitz’s current exhibition at the Jewish Museum, his first show in four years, because he has done IT with such power, resourcefulness and charm.

Kanovitz did start over, getting a new grip on his feelings by radically revising his approach to style in a “return to nature,” the richly ambivalent “nature” of the photograph – and, through it, to the “natural” realm of the social and psychological fact. He arrived at the idea of projecting a photo-image onto canvas and with opaque projector, tracing it, then painting from there. He takes the photos himself or clips them from newspapers with a cunning eye to the stifly “informal” pose, the assertively banal or enigmatic situation – his subjects ranging from anonymities to his closest friends and from a businessmen’s lunch at Ratner’s to a beagle on a lawn.

Kanovitz surrounds his meticulously draughted subjects with one flat, generally intense color. The matrix of this frontal hue involves the subjects but does not compromise them, only because the artist has patterned and composed them in perspective with the severest abstract discipline. Such tensions abound in these works. Kanovitz differs from fellow “realists” like Alex Katz and Philip Pearlstein who share his methods, in his re- fusal to disguise the “photographness” of his images coupled with his insistence on the absolute rigor and clarity of his overall designs. Everywhere he displays an appetite for paradox and dialectic. Another artist who works with this sort of multiple identity is Andy Warhol in his silk-screens of photographs of flowers, auto wrecks, and movie stars. But Warhol, benignly passive to the mess of ambiguities he has wrought, succeeds by silence; while Kanovitz, aggressively emphasizing each stray implication to its limit, makes it on good old Second Avenue nerve. (This is the right place to observe that Kanovitz was a professional jazz musician in the early 50’s.) Kanovitz underlines the OBJECT-ness of his works in every way he can think of – the “Hard-Edge” appearance, painting rather than framing the edges, neglecting to erase penciled guidelines, etc. Yet the paintings are vehicles of profound involvement with the facts of experience, as though driven constantly to ask the question, “How do people really look TOGETHER?” Tentatively, the artist accepts the photograph as a correlative of the visual truth, but in his very acceptance there is a sort of pointed equivocation. The “informal” pose, situated with abstract elegance, takes on a sense of contingency that is always on the verge of pathos-pathos in the collision of life’s ininite variety and art’s rigid necessity. The subjects, so “real” in their way, are trapped forever in the attitude of a moment, summarized as a “cheese” grin or an arrogant snifle.

With methodical wit, Kanovitz picks up on this implication and plays it to death in a wonderful series of lithograph-drawings called “Spectators.” In each of these the identical row of onlookers at some event has an utterly different set of faces. Yet the comedy retains a slightly tragic cast. In this word of contradictory possibilities uniformly realized we are on to something like the glorious and scary confusion of life itself, in a microcosm of the fact but a macrocosm of the sense and feeling. In a big painting called “The Dance” Kanovitz renders his wife and himself front-center in the midst of a desultory fox trot. Behind them are six anonymous bourgeois people poised for conversation, or boredom, or something. Mary Kano- vitz’s face bears the self-contemplative radiance of a Florentine Madonna. But Howard Kanovitz gazes straight out at us with a look that mixes pleasure and anxiety, as if the rich and disturbing ambience of the unlikely array behind him were projecting through his eyes. Painters who got their start under Abstract Expressionism still occasionally ask each other, “Where were you when the shit hit the fan?”

Kanovitz did start over, getting a new grip on his feelings by radically revising his approach to style in a “return to nature,” the richly ambivalent “nature” of the photograph – and, through it, to the “natural” realm of the social and psychological fact. He arrived at the idea of projecting a photo-image onto canvas and with opaque projector, tracing it, then painting from there.