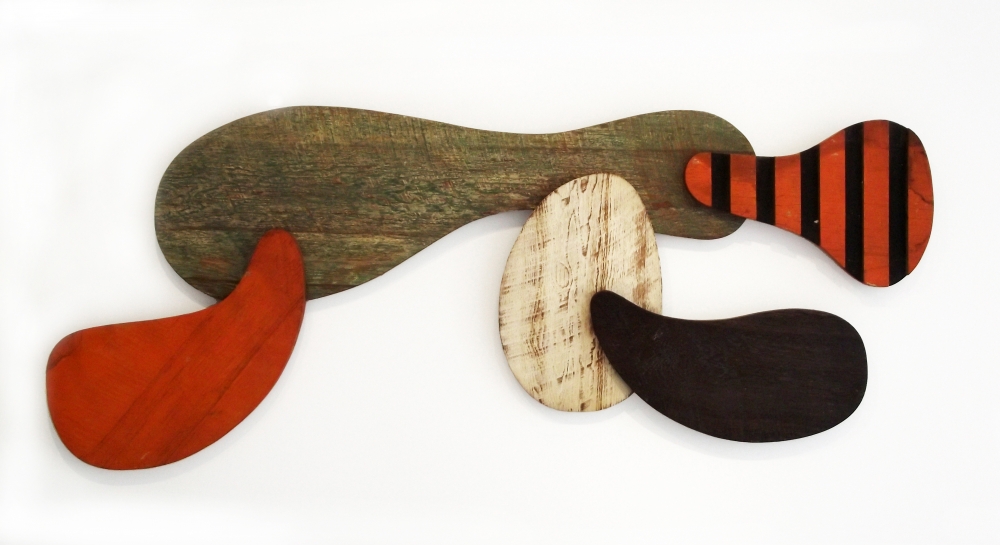 The immediate, unguarded response of first-time visitors to Sidney Geist: Phases of Sculpture, the exhibition currently on view at Jason McCoy Inc., is likely to be a mix of surprise, curiosity and delight. We don’t expect to see so much color in an exhibition of modern sculpture, or such captivating invention. We certainly don’t expect a party atmosphere. Yet a festive sprit is what we encounter in this survey of Mr. Geist’s sculpture from the years 1930 to 1997. Many of the sculptures are slender vertical figures of carved and painted wood, some more explicitly figural than others. Some are abstract variations on Brancusi’s Endless Column, though painted color-which Brancusi eschewed-remains a defining interest for Mr. Geist.

In fact, Mr. Geist has sometimes characterized these sculptures as “tall paintings.” Are they painting or sculpture-or both at once? According to Mr. Geist, who turned 90 last year, “I made the first of these tall paintings [in 1975], fulfilling a desire I had guarded for 20 years; I even used the long thin boards I had gathered for this purpose in the mid-1950’s. At that time I didn’t question the significance of my idea, but I can’t help examining it now. It seems curious, even to me, that paintings could be limited to such an unusual format and still be viable …. It now occurs to me … that they are sculptural-that is, like sculpture; indeed, as some may not realize, like the tall thin sculpture I did in the mid-1950’s.”

As Mr. Geist has further observed, “I am not the only sculptor who has painted when he wasn’t able to make sculpture. But it is especially comforting to feel that I’m doing something like sculpture while engaged in painting.”

Like many modernist innovators, Mr. Geist is an artist steeped in the traditions and materials of his art. His early studies were with the French sculptor Ossip Zadkine in Paris and American sculptors Jose de Creeft and William Zorach in New York. His mastery of sculptural tradition is clearly discernible in the earliest of sculptures in the Phases exhibition-among them, a terra-cotta Mask (circa 1930), a carved-marble Mask (1937) and a cast-aluminum seated figure, Girl Arranging Her Hair (1938). Since the 1930’s, wood-painted or unpainted, and sometimes combined with other materials-has remained his principal material.

It’s not only as a highly original artist, moreover, that Mr. Geist has significantly contributed to the aesthetics of modern sculpture. He’s also one of our most accomplished critics of sculpture. The bibliography of his published criticism is far too lengthy to be cited here, but mention must be made of his masterly monograph, Brancusi: A Study of the Sculpture (1968).

The Romanian sculptor Constantin Brancusi (1876-1957), who made his American debut in the 1913 Armory Show in New York, has long been considered one of the greatest-if not the greatest-of modern sculptors. Yet, for many years, the criticism and interpretations lavished on his work consisted of little more than a parcel of misguided theory and fanciful mystification. It wasn’t until the publication of Mr. Geist’s study, based on a close acquaintance with Romanian sources, that we were given a wholly reliable account of Brancusi’s personal history and artistic development, and this study has since been supplemented by Mr. Geist’s further writings on the sculpture.

Lest it be thought that this is an accomplishment of mere pedantry, I will quote a passage from Brancusi to convey the flavor of Mr. Geist’s critical sensibility:

“The primary experience on seeing a sculpture by Brancusi is that of knowing it at once. Prolonged attention or the accumulation of a series of views from a series of angles of vision adds nothing or little to the initial knowledge. Time only confirms what the first instant revealed; time continues to reproduce the first sensation. Many works of sculpture induce immediacy and totality of impression, but Brancusi’s oeuvre after 1907, almost in its entirety enforces them to an absolute degree.

“The intuition of instantaneous knowledge, of complete and sudden cognition, is, in short, revelation, and this Sidney Geist’s Phases: Part Sleek Sculpture, Part ‘Tall Paintings’ by Hilton Kramer, March 28, 2005 would seem to be the mode in which Brancusi saw the world when he saw it significantly, and in which he wanted his work to be seen.”

I certainly know of nothing in the Brancusi literature-or, indeed, in the entire literature of modern sculpture-that equals the exactitude of Mr. Geist’s account of this aesthetic experience. As both an artist and a critic, Sidney Geist is indeed a remarkable figure.