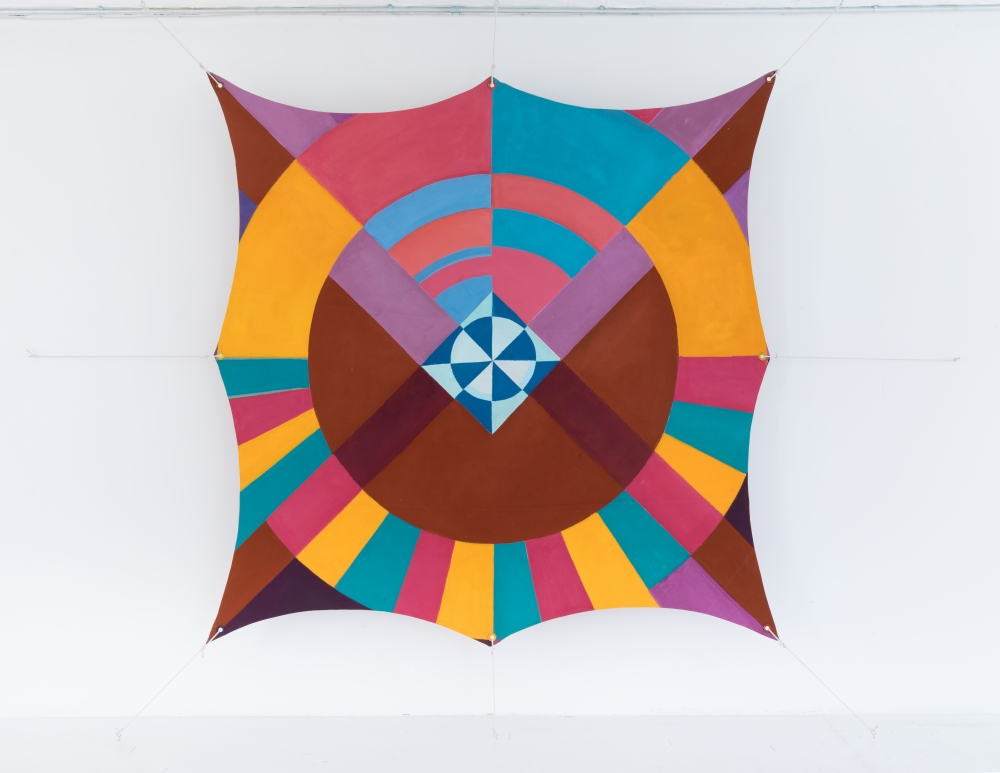 The history of postwar American abstract painting remains a work in progress. We are barely beginning to understand its sheer multiplicity in terms of the artists’ races and cultures and the works’ physical character. New information arrives in regular and humbling batches. The latest is Joe Overstreet’s stunning exhibition “Innovation of Flight, Paintings 1967-1972” at Eric Firestone. With 20 rarely seen works, it covers a brief period when Mr. Overstreet’s disavowal of painting’s usual standards and practices was unfolding rapidly in several directions, alongside efforts by Sam Gilliam, Harmony Hammond, Alan Shields and Howardena Pindell, among others.

Of central importance was Mr. Overstreet’s jettisoning of traditional stretcher bars, anchoring his work — to walls, ceilings, floors or a mix thereof — with thin rope, metal eyes and handsome knots. As the show’s subtitle suggests, evoking lightness and levitation was clearly a goal; some paintings here seem ready for takeoff. Another goal: giving equal prominence to how he painted and what he painted on. Sources and inspirations seem to include Jackson Pollock, Jules Olitski, African textiles, American Indian symbols and things nautical.

All together, the pieces deviate wildly in technique, combining stain, hard-edge and shaped painting. Stretched taut, carefully draped or seemingly suspended, these structures evoke tents, gliders, banners and even spaceships and maps. But these suggestions are all tempered by Mr. Overstreet’s brilliant use of color and process, and by beauty.

An early example that uses stretchers is “North Star” (1968), whose crackling bands of color involve both hardedge and stain painting and whose rectangular shape is transgressed by numerous notches, as well as by two cutout squares, so that it resembles a large mask. “For Happiness” (1970) also combines multiple painting techniques; it has 13 ropes that jauntily tilt its surface back and forth in space, challenging understanding of the piece as a whole.

In contrast to this complexity, “Hoo Doo Mandala” and “Mandala” (both 1970) are relatively square and frontal, but also gently billowed and scalloped by their anchoring ropes. Their radiant, asymmetrical geometries are reminiscent of everything from semaphore and hot-air balloons to tantric painting and the early Modernist works of the married artists Sonia Delaunay and Robert Delaunay.

In several works from 1972, Mr. Overstreet switches to an explosive, staccato drip technique, whose intimations of starry skies are regularly contradicted by dividing lines or added segments of canvas, leaving us suspended between deep space and eccentric objects. I look forward to seeing these exuberant, groundbreaking creations becoming standard in museums and new art histories.