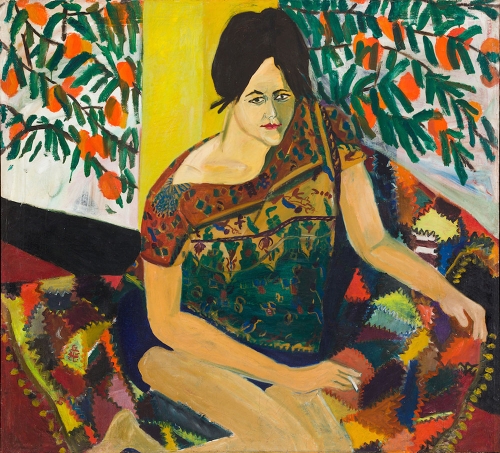 Start with the palpable energy of the works. The explosion of color and richness of the figure-filled compositions is only part of what supplies their vibrancy. The canvases and drawings (pages from her sketchbooks) embody a highly personal record of her social life and artistic vision. They also demonstrate the way the artist takes up a full range of aesthetic possibilities—from Symbolist, post-Impressionist, and Expressionist innovations––and synthesizes them into a unique personal approach, unafraid to draw upon traditions that were falling out of mainstream favor by 1960, as Pop, conceptual art, and minimalism were coming to the fore. Her connection to art historical models can be described as dialogic. She internalizes an inventory of art history to create something entirely her own. When you realize that Gross was barely into her twenties when she produced this body of work, it is all the more striking that nothing about these canvases and drawings is derivative or imitative. They are citational: their iconography, color, and composition are taken from modern art, and used to document her social universe and experience. The intellectual conviction of the work is what makes you pause—she was so young, so strong, and so able to step into that historical stream and make use of it for her own purposes.

Remarkable in their own right as paintings and drawings, Gross’s images are additionally unusual in the way they embody vibrant systems of social relations. The large canvases are filled with complex scenes of human connection and interaction but observed from within her experience. A subway platform crowded with passengers communicates an immediate sense of immersion. The impulse to draw from observation pushes Gross’s hand, eye, mind, and heart to work together. “This is here now I will draw it,” is a constant drive. The more formally composed group portraits are clearly presentations of people she knows: The specificity with which the individuals are rendered is rooted in observation of behavior and character, not just features or postures. The richness of each canvas, compositionally dynamic but organized with graphic frontality—the design of the space is always realized, powerful, and in relation to the whole area of the canvas—is matched by the engaged air of her portrayals. These are not figures being looked at, but also looking back, the studio conversation hangs in the air.

Everywhere in the canvases, one has a sense of recognition—that person, this group, that moment. The way figures dodge or meet her gaze on a particular day is recollected. A woman, head in hand, hides part of her face in a gesture of interior discomfiture. I have seen this. I am present to this person, this event, this circumstance. Who else documented the social scene of their activity with such assiduous attention, while simultaneously exploring a full inventory of visual approaches to the themes, subjects, compositional approaches, and techniques of modern art? It is hard to conjure a vivid example. If Gross’s work harks back to anyone, it is Florine Stettheimer—also now redeemed from unjust obscurity—whose idiosyncratic visual sensibility recorded the unique individuals, in all their quirks and traits, with whom she was in constant relation and dialogue.

Any artist comes into their formation at a specific moment, and the imprint of early 1960s sensibility locates Gross’s work in its formative conditions. The style motifs of hair and dress—flowered dresses, massed hair, preppy ties, and v-neck sweaters—speak volumes about that moment on the verge of a flower child hedonism to come. But Gross is careful not to let trends or styles overpower her subjects. Grand Street Girls (1963) is exemplary in its inscription of individual faces, complexion, and body language. The hairbands and hairbows (!), scarves, and residual bouffant coiffures, locate the image precisely in its historical time and place without flattening the women’s individual personae, their expressions of introspection, confrontation, boldness, deferral, and hedged or unabashed gaze. And yet, they are a group. No single figure dominates. This sense of networked circles of social relations is powerful as these are women working among peers, not aside from them.

Gross is similarly deft in her nods to other periods, which always enhance her subject matter. An intimate but unsentimental image of a woman and a child successfully references Mary Cassatt. Other portraits push towards the edgier portrayals of Egon Schiele, less raw, but no less revealing of emotional states. Saturated color, bold dark outlines, and thick pastel surfaces remind us of van Dongen and Henri Matisse. A landscape with a bright blue horse and another with flying floating figures echoes the Blaue Reiter painters, for whom color defined space and reality, while other illustrations are reminiscent of religious iconography in their use of the side profile. Figurative modernism—flush with color, formal innovation, but freed from literal representation by much earlier generation of symbolists and post-Impressionists—is what feeds Gross as she absorbs and defines her own approach.

Recognition of the variety and virtuosity of Gross’s work increases as the scope of the exhibition becomes clear. These are not Exercices De Style done to show off her art historical knowledge or the capacity of her gifted hand. They are, instead, style exercised, in the muscular sense. The artist is working through the absorbed vocabularies to exercise herself, stretch, build, grow her capacity to draw in this way or that according to the requirements of the subject. Again, what is interesting is that the stylistic materials draw from the figurative traditions so despised by most of high modernism’s critics, including those of the later art history establishment.

What is not present is also interesting: Formal abstraction, non-representational imagery, and work with overt political themes are all absent. Given Gross’s moment, these omissions are clearly deliberate. Neither extreme of the modern spectrum (aesthetic opposition or formal materiality) served her purpose. She was, and is, engaged with observation and observer engagement. That the history of modern art was written with such emphasis upon formal innovation and avant-garde “politics” only shows the poverty of that discourse—which cut out the wider spectrum of works that record life, the actuality of lived aesthetics within periods of modernity. The early 1960s was not a period in which Gross’s observed and referential work would have found a critical reception. When the larger project of rewriting modern art history finally occurs, it will benefit from including the work of 19th-century figures like Winslow Homer (before Prout’s Neck), the early 20th century Ashcan School, the immigrant artists who drew the streets and people of New York in the 1920s, and beyond. Modern experience, lived and embodied, and visual modernity are intimately linked. Mimi Gross shows how vividly this is the case and why it matters in terms of the exclusionary practices of art historical narrative. The work was always there, just not recognized. That should change now.