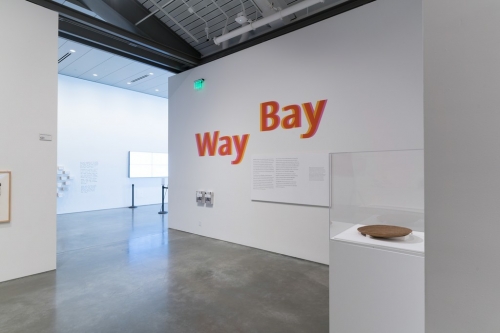 Way Bay is a sweeping exploration of the creative energies that have emerged from the San Francisco Bay Area over the past two centuries. An innovatively organized exhibition of art and film, plus poetry, performance documentation, and archival materials, Way Bay features nearly two hundred works that reveal the depth and diversity of artists’ engagement with the region’s geographic, social, and cultural landscape.

In contrast to a conventional historical survey, Way Bay is organized to suggest poetic currents and connections among works from disparate cultures and communities, highlighting transhistorical affinities among artists, filmmakers, authors, and other creative practitioners who have contributed to—and drawn inspiration from—the region’s distinctive character.

Continuous film screenings in the galleries showcase the Bay Area’s rich history as an incubator for avant-garde and experimental cinema, beginning with a silent film that captures life on the streets of San Francisco just days before the 1906 earthquake destroyed much of the city. The exhibition also includes highlights from BAMPFA’s extensive archive of video and audio recordings by artists working in the Bay Area, as well as an interactive postcard project devoted to poetry by Bay Area writers. A series of lectures, performances, readings, and participatory workshops in the Fisher Family Art Lab extends Way Bayacross diverse media and disciplines.

In addition to works from BAMPFA’s collection, including many recent acquisitions on display for the first time, Way Bay includes exceptional paintings, prints, photographs, and other works from UC Berkeley’s Bancroft Library and Phoebe A. Hearst Museum of Anthropology.