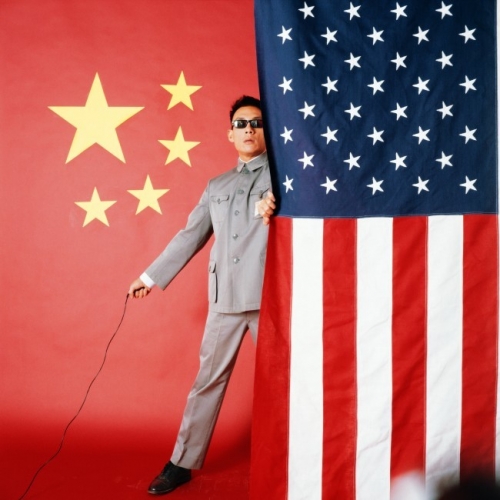 As an Asian boy growing up middle-class in America, I was taught assimilation was key. With the right dress and verbal codes, I could be a part of the the healthy, wealthy, and white lifestyle of magazines and sitcoms. Of course, I learned later this was false, and encountering the work of Tseng Kwong Chi helped me bury those aspirations for good. In his best-known series, East Meets West, Tseng photographed himself as the ultimate outsider: wearing reflective sunglasses and a “Mao” jacket, chin tilted up and unsmiling as he posed by the great monuments of the West — Disneyland, Notre Dame, the World Trade Center. He doesn’t hide the shutter release cable in his hand, reminding us that he is in control of the image. By simultaneously inhabiting every possible stereotype of an Asian person in 1980s America — tourist, communist, inscrutable, other, loner — he transcended all of them, creating an icon of himself.

Read alongside Tseng’s biography, the layers to this persona become Gordian: his parents fled mainland China for Hong Kong, where he was born in 1950, the year after China’s Communist Revolution. After living in Vancouver and studying in Paris, Tseng moved to New York in 1978 and lived the ten wild, experimental years out of which his art grew. His performance of the stoic communist, then, takes on two more ironies: he was, in real life, not a tourist but a cosmopolitan skilled at acclimating to new cultures, and a part of the diaspora fleeing Communist rule.

The exhibition Tseng Kwong Chi: Performing for the Camera, organized by Amy Brandt of the Chrysler Museum of Art and starting its national tour at New York University’s Grey Art Gallery, offers us more scenes in the great drama that was Tseng’s life. The eighty-some photographs are organized around the different modes of his brief, vibrant career: besides the famous East Meets West series, we see his sarcastic photos of the right-wing Moral Majority in front of a crumpled American flag, the frenzy of the ’80s downtown art scene, and his portrait and vox populi work for magazines and periodicals. Most of the images are square-format, the rich range of tones on full display in large 36 x 36 prints.

We learn very quickly that Tseng was not exactly an outsider. Here he is, mugging with Yves Saint Laurent, chatting with Andy Warhol, smiling nervously next to a checked-out Fran Lebowitz. Then there are his lush, intimate portraits of Keith Haring and Basquiat in their studios, and the iconic series of Haring painting dancer Bill T. Jones’s body in white stripes.

Tseng cashed in his alien persona to great effect. Like the odd child in the family portrait, he looks just as comfortable wearing his suit in Jacob Riis Park with smiling beach-goers as he does with the glammed up crews that hung out at Palladium, a concert hall in the downtown scene. In his most infamous stunt, he crashed the Met’s Party of the Year in 1980, posing as a Chinese dignitary. With this role, he snagged lots of photos with celebrities, banking on no one knowing enough about China or its government officials to call him out.

Tseng furthered Warhol’s idea of making fame famous, predicted the selfie, and infused all of it with his wry reading of America’s racial politics. He mined his own history to become an exaggerated version of what Americans thought he was, in his words, an “ambiguous ambassador.”

What we don’t find in this massive visual archive is any clue to Tseng’s internal life. His artwork was far ahead of his time, and his identity as a queer, immigrant, Asian artist in America in the ’80s informed that edge, living a reality that had yet to be accepted, socially or politically, in this country (we are still waiting to see if they will be). One has to wonder at the painful self-exploration behind the tinted sunglasses, the smiling scenester. We have evidence of a life well-performed, but almost nothing about the life that went on when the party winds down and the cameras are put away.

Maybe Tseng didn’t want us to know that other life, but wanted to be remembered by the images more than the emotional and quotidian life that strung them together. Tseng’s death, at age 39, of AIDS-related illness, leaves that question unanswered.

One image in the exhibition gives us some idea of Tseng outside of his most famous persona. Tseng, wearing makeup, a shoulder-length blonde wig, and white dress, blows a kiss to the camera. His arm is wrapped around the artist Kenny Scharf, in a coiffed wig and leopard-print dress, at a party at Scharf’s loft. I had to blink to remember that this was the same body hidden by the sunglasses and stiff suit. Surely Tseng inhabited many more personae than this, and would have lived thousands more had he lived past his fortieth birthday.

At the exhibition’s opening, I heard someone say it was like a funeral — all these people she hadn’t seen in thirty years. Throughout the gallery, there was a lot of pointing and comparing, reminiscing about the clubs and lofts where people spent their twenties, where every outsider was an insider, and the more difference you brought, the better. You could almost see Tseng there in the middle of it, his camera ready.