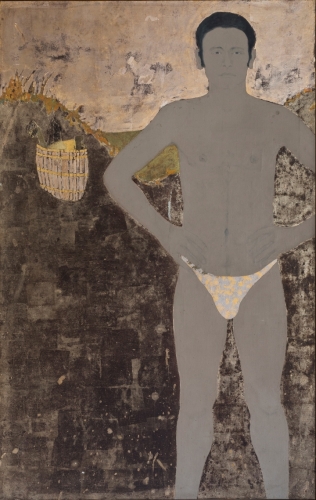 A line of gold runs through the paintings of Marcia Marcus, an elegantly decorative stream one can follow all the way through her exhibition of portraits, Role Play: Paintings 1958–1973 at Eric Firestone Gallery. The gold leaf that Marcus had sometimes combined with her oil or acrylic paint appears most often as a line describing an object or separating out a figure from the space around it.

I first notice it in Marcus’s “Portrait (Lawrence H. Bloedel)” (1971), in which Bloedel’s glasses are described in gold leaf. In “Lucas in the Dunes” (1965), the metal bands holding together a wooden barrel in the distance and stars decorating the bikini-style swim trunks worn by Lucas Samaras both are celebrated with the addition of the lustrous, metallic sheen. In her “Family II” (1970), the gold leaf mixed with blue acrylic paint that defines the frame of a large mirror shimmers toward rose and purple in such a lovely way, I send myself on a hunt for other occurrences in the show. There are necklaces, belts, earrings, a strap holding up a multicolored blouse in the back, and a door frame among the uses of gold leaf.

Silver leaf also appears, though with less frequency: for example, in “Nude (Judy)” (1965), where a line of the material marks the figure out from a very shallow background and an adjacent wall. Against the flat, chalky, muted colors in tones of gray that predominate, and the general lack of detail in the figures, the use of gold and silver leaf reads like signs of a unique personality. The paintings feel somewhat in step with the Pop art and Minimalism ascendant in the 1960s, when much of this work was made, but headed in Marcus’s own self-aware direction.

Thankfully there is some considered critical attention being paid to Marcus now, with critics acknowledging more than what I have highlighted here: her deft hand at creating spatial complexity and her compositional strangeness combined with the employ of unexpected materials. More, this show also demonstrates her political generosity in the ways she presented African-American subjects with the same grace and clarity she used to represent her own family. The paintings here are serene, but also inventive portraits, images of Marcus’s subtle revelry in her ability to make these subjects her own