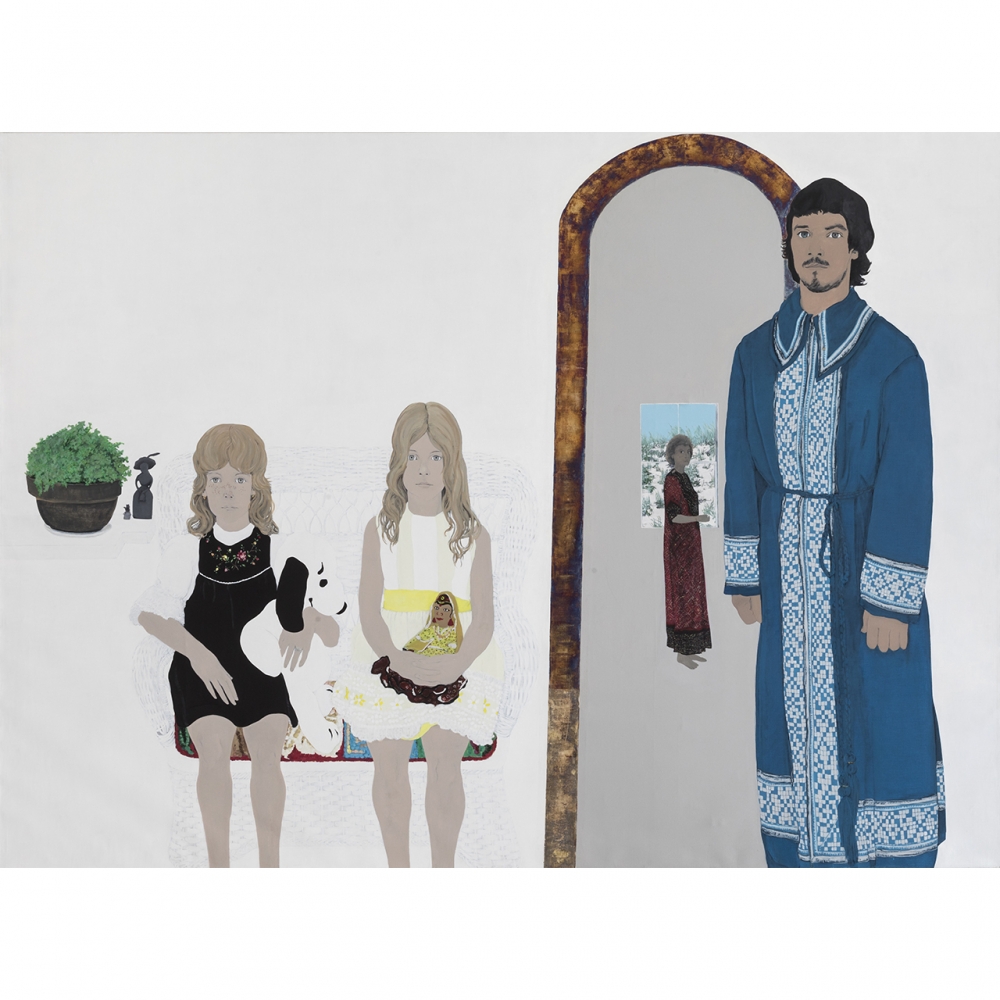 According to Rachleff, Marcus exhibited 10 self-portraits in April 1960 in Red Grooms’ Delancey Street Museum, shortly before it closed its doors: “These ten paintings depict Marcus through feminine tropes, from Medusa to high-society women to vamps, and the show was favorably reviewed.” The reviews did not lead to commercial success, however, which was not surprising since Marcus was a woman.

In 1960, the art world was not ready to accept Marcus’s conceptual approach to portraiture. While Marcus exhibited sporadically in New York between 1957 and 1979, and was included in many group shows, including one at Pace Gallery in 1981, she seems to have become one of the invisibles.

Marcus is a forerunner who has not received the recognition she deserves. Rachleff ’s inclusion of “Self-Portrait in Fur Jacket” was a first step, but more need to be taken. Thankfully, someone noticed and we can now see 19 of her portraits and self-portraits in Marcia Marcus, Role Play: Paintings 1958 – 1973 at Eric Firestone Gallery (October12–December 2, 2017), a number of which come from museums and private collections.

Make no mistake. Between 1958 and ’73, the period covered by the exhibition, Marcus achieved something as singular and powerful as any of her more celebrated male counterparts, including Alex Katz and Philip Pearlstein. Even now, nearly 50 years after “Anna” (1973), the latest dated work in the show, her paintings look fresh and cerebral in a confident way. Marcus could be witty in her paintings even as she found different ways to challenge herself. Look at the understated attention she pays to cloth, pattern, and surfaces (shoes), or at the spatial complexity she achieves in “Double Portrait” (1962), “Frieze: The Porch” (1964), and “Family II” (1970) and you will be left with no doubt in your mind about how good she really is.

Marcus attended Cooper Union (1950-52), where her classmates included Katz and Lois Dodd. In “Marcia” (1959), Katz painted the artist in a white outfit, which we see her wearing in “Self-Portrait in White Dress” (1959). In 1954, Marcus attended the Art Students League (1954), where she studied with Edwin Dickinson. From him, she acquired a love for gray and perhaps the idea of dressing up.

In “Nude (Judy)” (1965), she give us a cropped view of a female nude – her breasts and crotch – in shades of gray, with silver leaf functioning as an architectonic element. This and other paintings Marcus executed in grays or a Marcia Marcus, “Jack” (1964), Oil on canvas, 24 ¾ x 16 inches highly circumscribed tonal palette would more than hold their own against Dickinson’s own tonal canvases. All the paintings on view that are done in a restricted palette are dated 1965 or ’66, which seems to suggest that these works constitute a self-contained group within her oeuvre.

In addition to Dickinson, Marcus absorbed lessons from fresco painting and Byzantine portraits. She painted her figures flat with a dry brush, and liked to present them frontally. Even when we see them from the side, Marcus finds ways to acknowledge the picture plane. The colors are chalky. Committed to direct observation, she brought a rare fancifulness into her work.

In “Florentine Landscape” (1961), one of the largest paintings in the exhibition, she depicts her friend, Red Grooms, as a recumbent, semi-nude odalisque in the extreme foreground, stretched along the bottom of the painting. Grooms is rendered in pale yellows, with a striped yellow cloth draped over his hips, a color scheme that sets him apart from the rest of the painting, which is dominated by muted grays, browns, and greens. He is lying in front of an elevated, low-walled enclosure that recedes behind him. A woman in a faded violet toga stands in the far distance, and off to her right, leaning against the garden’s low wall and gripping a tangled white-and-black flag beside him, is a young man in a black ski mask, brown sleeveless t-shirt, and gray shorts.

Returning to Grooms, we notice that, while the blanket he is lying on, which appears to be decorated with Native American symbols, is tilted up towards the picture plane, with Grooms’s torso and legs parallel to it, everything else in the picture is rendered in single-point perspective. The disjuncture is deliberate, further underscoring the mystery of the scene.

One of Marcus’s innovations is the way she divides the space inhabited by her subjects. In “Family II (1970), her daughters sit on a white wicker love seat in a pristine white room, where an arched entry looms to their right. Their father, dressed in a blue and white robe, stands to the right of the archway, partially blocking it. In the gray space defined by the archway, we see a woman in the mid-ground, in red robe. Behind her and framing her form, a window opens on a sand embankment and clumps of dune grass. While the three figures in the foreground are presented frontally, the woman is depicted in profile, her head turned towards the viewer, aware that someone is looking.

On one hand, Marcus’s painting is deadpan, with large areas of flat color. Spatially, however, the placement, size, and separation of the figures invite viewers to supply a narrative. Whatever emotions and ideas are bubbling beneath the painting’s cool, calm surface, the tension we feel is arrived at formally. In fact, the only portrait that shows a family existing in the same unified space, forming a single unit, is “Yyna, Alvin, and Baby” (1970/71), depicting an African American family she knew from the summers she spent in Provincetown, Massachusetts, painting in a dune shack.

Marcus’s other innovation is in terms of subject matter. Her depictions of African Americans in “Jack” (1964), Marcia Marcus, “Florentine Landscape (1961), oil on canvas, 78 ½ x 94 ½ inches, Neuberger Museum of Art Purchase College, State University of New York; gift of Roy R. Neuberger (all images courtesy Eric Firestone Gallery, New York) “Renoir” (1968), and “Tyna, Alvin, and Baby” (1970/71) at the height of the Civil Rights Movement in a country undergoing social upheaval, can be seen as a forerunner to the work of Kerry James Marshall and Barkley L. Hendricks.

“Jack,” who is shown in profile, is wearing a white shirt and white sweater with a blue and red neckline, which I have always thought of as an emblem of the Ivy League. Long before Cindy Sherman played at dress-up, Marcus recognized that presentation was central to one’s interaction with the world.

I have no idea of how many works Marcus made over the course of her career (she is still alive but no longer making art), but the 19 paintings in this exhibition made me very curious to know and see more. Her work addresses a wide range of formal and social issues directly and indirectly. She is the forerunner of Catherine Murphy and the melding together of direct observation and the imagination. Someone should really do a book on her.