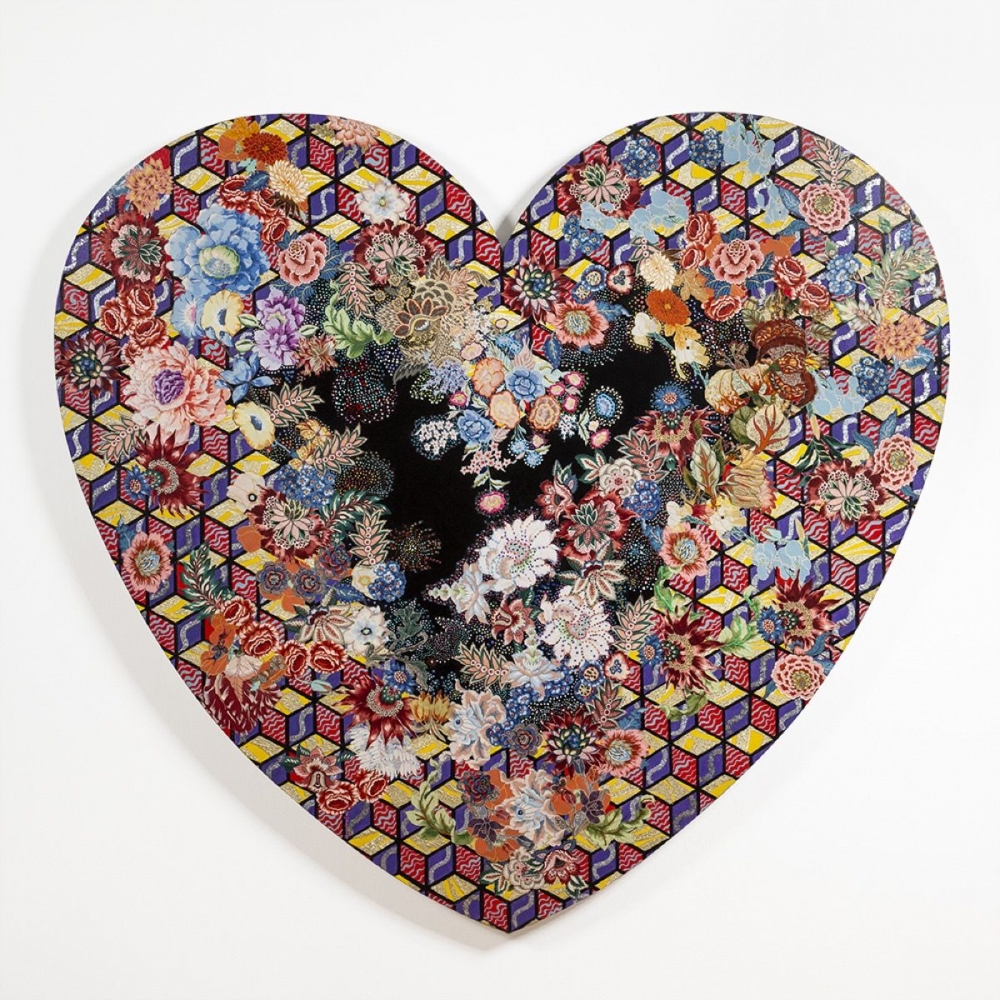 In 1898, the renowned Russian author Leo Tolstoy wrote: “Real art, like the wife of an affectionate husband, needs no ornaments, but counterfeit art, like a prostitute, must always be decked out.”

Eight decades later, the American artists Valerie Jaudon and Joyce Kozloff—central figures in the
Pattern and Decoration movement—set about mining such quotes to better understand the way modernism’s white male–centrism had shaped conceptions of good art. They assembled what they found into an article titled “Art Hysterical Notions of Progress and Culture.” It featured cameos by Pablo Picasso,  Barnett Newman, and Willem de Kooning, among many other famous artists, with quotes that revealed flagrant or latent biases: a way of speaking about art that reflected virulent masculinity, sexism, and a belief in the superiority of the West over the developing world. Perhaps most notable was the claim by H. W. Janson, who published one of the canonical histories of art in 1962, that the applied arts are “of a lesser order than art, pure and simple.”

Jaudon and Kozloff also found that art considered to be lesser was connected with words like “sensuality,” “pleasure,” and “ornament.” The progenitors of modernism may have seen decorative art as superficial fluff, but the loose affiliation of artists who identified with the 1970s Pattern and Decoration movement saw the sensuous, pleasurable, and ornamental as every bit as legitimate, complex, and sophisticated as the icons of modernism.

Pattern and Decoration—or P&D, as the movement is also known—looked to decorative traditions across the world, to surfaces like textiles, and to wallpaper, manuscript illuminations, mosaics, glassware, embroideries, and architectural flourishes. “Art historians, absorbed in the rational and moral superiority of Western art, seldom notice that most of the world’s artistic production has grown out of the impulse to adornment,” wrote Amy Goldin, a scholar of Islamic art and P&D’s first theorist, in 1977.

Pattern and Decoration—or P&D, as the movement is also known—looked to decorative traditions across the world, to surfaces like textiles, and to wallpaper, manuscript illuminations, mosaics, glassware, embroideries, and architectural flourishes. “Art historians, absorbed in the rational and moral superiority of Western art, seldom notice that most of the world’s artistic production has grown out of the impulse to adornment,” wrote Amy Goldin, a scholar of Islamic art and P&D’s first theorist, in 1977.

In 1975, New York–based artist Robert Zakanitch hosted a gathering to discuss a new decorative tendency in the arts, which could be seen in his own large-scale paintings of floral patterns. Among those present was Miriam Schapiro, who is best known for her “femmages,” or feminist collages—compositions bursting with florals and encrusted with rhinestones, handkerchiefs, and other fabrics that allude to domestic spaces and women’s work—and who is perhaps most closely associated with the P&D movement.

Kozloff, with her paintings of kaleidoscopic pattern evocative of Islamic tiles and American quilt designs, was also present, as was Goldin, who had observed a trend toward exuberant pattern in the 1975 Whitney Biennial.Exhibitions dedicated to the movement would soon come with Jane Kaufman’s 1976 “Ten Approaches to the Decorative”at Alessandra Gallery in downtown New York and “Pattern Painting” at New York’s P.S.1 Contemporary Art Center; it would also find commercial support from dealer Holly Solomon.

Among the many artists associated with the movement, Jane Kaufman made quilts like her Embroidered, Beaded Crazy Quilt (1983–85), a giant patchwork of fabrics embroidered together with historical stitch designs. Robert Kushner, who traveled to the Middle East with Goldin in 1974, concocted fantastical fashion designs, some of which incorporated Iranian fabrics or riffed on the Persian “chador” veil worn by women. Jaudon’s latticework paintings invoke Islamic and medieval architecture, Celtic illuminations, American quilts, and geometric abstraction, among other traditions.

While P&D elevated women’s work and crafts, it included men, too, and the group was large and amorphous. “Feminism helped make P&D possible,” as art historian Anne Swartz has written. “But it was not a feminist movement.” Rather, she says, feminism helped give P&D artists and thinkers their inclusive attitudes and collaborative network. Many of the movement’s female artists considered themselves feminists and had, in one way or another, touched the feminist art movement.

Schapiro, for instance, was a key participant in the Feminist Art Program at CalArts. Barbara Zucker had co-founded an art venue for women, New York’s A.I.R. Gallery. She exhibited artists like Howardena Pindell, whose decorative compositions are subtly, richly laced with social and political content.

While many P&D artists were based in New York, others—like Kushner and Kim MacConnel—were based on the West Coast. And while they didn’t belong to the movement per se, Faith Ringgold, Emma Amos, Merion Estes, Neda Alhilali, and Alan Shields, among others, are included in Katz’s extended field of contributors.

Why does Pattern and Decoration matter?

Pattern and Decoration had a brief, buoyant moment, and then fell out of favor. As New York Times critic Holland Cotter has written, “In the
neo-Expressionist, neo-Conceptualist late 1980s, no one knew what to make of hearts, Turkish flowers, wallpaper and arabesques.”

Yet the movement resonates with our current moment, looking ahead as it did to the plurality of traditions and cultures celebrated in today’s art world, to its rejection of sexist and ethnocentric biases and its aspirations of inclusivity. “What was on the table—the chopping block, as it turned out,” Katz writes of P&D in the MOCA catalogue, “were the very systems of valuation that had dominated Western art history for centuries, and the primary focus was the hierarchy of fine arts above decorative arts.”

P&D also occurred during something of a watershed moment in the Western art world. Indeed, Cotter has suggested that it may have been the last movement of the 20th century, and possibly the last bonafide movement ever, as postmodernism did away with any notion of a singular narrative of art-historical progress.