Miriam Schapiro: The California Years, 1967-1975, is the inaugural show at Eric Firestone Loft opening February 4, 2016 through March 6, 2016. This exhibition showcases the pioneering feminist artist’s work from her time on the West Coast and highlights her range of styles from the period including hard-edge paintings, computer-generated images, and her earliest Pattern and Decoration works. The show announces Eric Firestone Gallery’s exclusive representation of the Estate of Miriam Schapiro and is on view concurrently with The National Academy Museum’s survey, Miriam Schapiro, A Visionary.

Miriam Schapiro, widely renowned as a founder of the Feminist Art Movement and Pattern and Decoration, employed a wide range of techniques throughout her career. This exhibition focuses on a radical moment of experimentation and success in her oeuvre. As a member of the New York School in the 1950’s, Schapiro gained recognition in the notoriously male-dominated environment, securing a spot in Andre Emmerich Gallery’s preeminent stable alongside Helen Frankenthaler, Anthony Caro, and Morris Louis. When she left New York for San Diego in 1967, she moved from her familiar network, entering the cutting-edge California art scene. As a lecturer at UC San Diego, Schapiro took advantage of her new setting; the scale of her canvases dramatically increasing and the California landscape finding its way in, her hard-edge painting reflecting the expanse of the coast and modern architecture. Subversively, these hard-edge compositions celebrate female desire through her coded depiction of yonic forms.

The artist’s production became increasingly experimental at the time as well, utilizing metallic paints to create the feeling of the ocean at midday, atmospheric spray paints, and reflective mylar. In a radical innovation, Schapiro worked with computer programmers at UCSD to rotate her open shapes in three dimensional space, projecting the digitally produced images to be transferred onto her canvases in order to create works of technical precision.

In 1970, Schapiro joined the faculty of the newly established California Institute of the Arts and met Judy Chicago, with whom she would found the school’s Feminist Art Program. Schapiro and Chicago implemented a program of experimental pedagogy and collaborated with their students to mount the watershed exhibition, Womanhouse, in a condemned Hollywood mansion. Her work became increasingly overt in its feminism as Schapiro increased her involvement with the Feminist Art Program, and the larger feminist movement spreading through the nation. In 1972, Schapiro began creating her iconic “femmages”, a term she coined to describe her use of collaged fabrics, craft materials, and paints as connected to traditional women’s craft and labor. Displayed in the loft space in conversation with the hard-edge and geometric paintings which preceded them, a cohesive story of exploration emerges and Schapiro’s strength as a formal visual artist is displayed in depth. 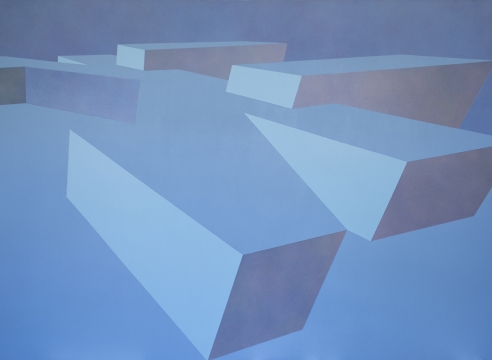 Miriam Schapiro
Back To Top